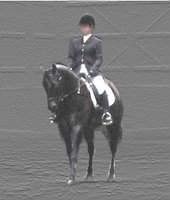 There's a lot to be said for having horses in the yard. There's also a lot to be said for occasionally getting them out of the rose bed and the koi pond and hauling them off somewhere where you can take a lesson or two so that you and your horse are forced to reestablish the pecking order in your herd of two. Nothing says chaos like a backyard horse and his owner trying to deal with trailering and all the fuss and bother that Going Elsewhere entails.
Just this morning I bit the bullet and packed up Zips Butterbuns for a trip to High Point Equestrian Center in Montague, New Jersey, where we were signed up for a dressage clinic with judge Jake Staple. This is not our first trip to Lester's. Once upon a time, a little over a year ago, I got it in my head that Zipper needed to be taught that his whole life doesn't have to be spent with his head stuck through my fence eating the lawn. He'd been to a couple of shows with my daughter, and I'd even ridden him in a Geriatric Equitation class and come in second once, but it had been several years, and I thought an outing would do us all good.
So, on that occasion I called Lester Murphy, Eventing Guru of Sussex County and the only person I know brave enough to deal with my hysteria plus whatever Zip might bring to the party, and asked if he would take my horse in for a month of intensive de-buddying. He said yes, and off we went. I was surprised at how well Zip handled the trailer ride, and Zip was surprised when I deposited him and left. Hard as it was, that turned out to be one of the best things I've done for my horse and me, as we both had a chance to get over our anxieties.
When you have your own place, it's difficult to justify spending money to take your horse to someone else's barn, but it's worth every penny. Each time one of the horses has left home for more than a day, there's been a huge leap in maturity. The horse has matured, too. Zip was more worldly-wise after a week at the state fair than he was when he was running around here playing Keep-Away with my daughter's favorite riding jacket.
Back to cases. Today we did something even better than hauling out for a lesson or doing a sleep-over at another barn. If lessons are good, clinics are double-good. At a clinic not only is there instruction for horse and rider, but there's the opportunity to kibbitz during other riders' lessons. There's much to be learned from sitting around watching and listening while other people are learning things you thought you knew. If you're conscientious, you'll avoid watching with a smirk and an "I knew that" attitude and think about the fact that you don't know nearly as much as you think you know.
Jake Staple was quick to point out right off the bat that we'd all like to be perfect, and some of us--clinicians and judges included--think we are, but photos and videotape don't lie. She suggested I make myself feel better by checking out the pictures in her magazine where I would find her with her hands a foot above the horse's withers and her fellow clinicians leaning, twisting, and otherwise imperfectly demonstrating their humanity. I did; and she was right.
This was not my first clinic, but it was the first one I'd actually attended with horse in hand. I'll be doing this again. Often. I was pleasantly surprised by my horse's exemplary behavior, and even moreso by the amount of sweat we both produced. I just don't push that hard at home, and it shows.
Long and short: Find a clinic and go to it. Take a horse. Learn stuff. Come home and practice. You and your horse will be the better for it in more ways than you can imagine.
Posted by Joanne Friedman, Freelance Writer, ASEA Certified Equine Appraiser, Owner Gallant Hope Farm at 1:53 PM