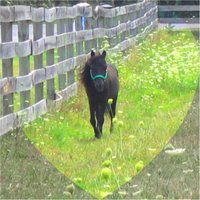 Hard to believe, isn't it, that this little guy is the scourge of the pasture? Use the four-foot fence for reference. He's a 34.5" high miniature stallion nicknamed, appropriately, "Duke". The big horses have other names for him, but we'll let that slide.

Duke is adorable. After an initial breaking-in period during which we would all have been dead if he weighed more than 200 pounds, he became the darling of the neighborhood. He's broke to drive and loves attention. He's the only horse in the pasture who comes running at the sight of the longe whip and stands at his tie-up spot waiting to be put to work.

The bad news is that the operative word in his description is stallion, as in stud, as in "Get your butt away from my woman!

For the first ten months, all went swimmingly. There were moments of chaos when horseplay turned a little rough, but when you've got five geldings, that's not shocking. Then spring came, and with it the solitary mare's hard spring heat. Suddenly Duke lost his royal bearing and the big boys came in bleeding more often than not after a romp in the pasture.

I'd begun to wonder what the future of this little guy might be . . . and where, as he obviously wasn't fitting in here anymore. Separation was working, but it was unwieldy as his moods shifted so quickly it was hard to find a companion for him, and without one he ran the fenceline and flung himself into the boards. To boot, I had the niggling fear that the kids who work for me might inadvertantly let the mini out into the pasture and not be able to retrieve him before damage was done.

That's how it stood when I saw the ad for the Tri-tronics Vice-breaker electronic training collar with a testimonial from Clinton Anderson. I've never met the man, but he's pretty high on the Natural Horsemanship food chain, so I tore out the page and let my fingers do the walking through the internet search engines until I came up with the model I needed at a price I was willing to pay.

This is not a cheap toy. The lowest price I found was at www.mightypets.com, and at $349 (with free shipping) for the H1 model (that's the one-horse set-up), it was a sizeable investment, but far less than the impending vet bills if I didn't get the little fellow to stop trying to castrate his pasture mates. I ordered it, and the box arrived in just a few days.

To say it works is to say the sun is warm. It's key that the user be at least a little versed in training methods and available to be present consistently for a few days at the beginning. The trainee horse needs to wear the collar for a couple of days prior to use so that he/she gets used to it and doesn't connect it to the cue that will shortly follow. The trainer needs to remember to target just one behavior at a time and not move on until the one targeted has been extinguished. S/he also needs to avoid yelling, shrieking, whacking, and arm-waving while pressing the zap button. It's important that the horse make a connection between the sensation and the behavior, not the sensation and your hysterical dance.

The tingle the horse feels from the collar is slight. At the highest setting, it's a noticeable zap that lasts no more than three seconds even if a panicked operator freezes. An electric fence wire is 4000 times higher in shock value.

The collar is top-notch for the less-dramatic vices like weaving, stall-walking, cribbing and the like. Those should be easily extinguished within a few sessions. Aggressive behavior can be more difficult as it has so many parts and variations and is likely to take place at a distance. In Duke's case I started with his habit of charging the fence with his neck snaked when the boys were working in the ring. He still needs reminders, but after a few sessions, that behavior has almost disappeared.

The second level of aggression was his herding the boys around and preventing them from leaving the area where he wanted them to stand. By breaking it down to one pairing at a time, I have been able to convince Duke that Leo and Pinky shoot flames out their butts. He's now happy to stand in the same stall with his most-disliked adversary, Dakota, and clean up spilled grain there without so much as an ear laid back on either side. He's fine with the mare--always has been--so that just leaves his arch-enemy, the mare's ten-year-old son, Zip.

This would be a simpler problem if Zip would stop muttering bad things about Duke's mother. That sort of calling-out was what launched the enmity between the two former best buddies, and it's not helping the cause one bit. They are capable of face-to-facing in the barn and over the fence, but the vibe is such that I don't think they're ready to be turned out together until I can be on hand to break up whatever fight might ensue.

One of the best features of the Vice-breaker is its half-mile range. I can sit in my living room watching the horses outside and push the little red button without being in close proximity to the action (or visible to the horses). Of course this isn't much help if the horses are out of sight. Planning is essential.

A nice little side benefit has been that the interactions I have with Duke now are always positive. I no longer have to yell, threaten, wave, jump up and down, or chase him around through a cloud of epithets, so he looks forward to seeing me. We are much more closely bonded than before.

When the vice-breaking part of the program is over, there's a green button on the transmitter that will send a positive tone to identify and reinforce good behavior. You don't want to confuse the horse by using both at once. Take it one step at a time. Get rid of the bad, then bring in the good.

So, today's post is a recommendation of the highest level for a training aid that we've been needing for a long time. With replacement neck bands (which are soft leather and elastic and don't leave so much as a ruffle in the horse's hair) readily available and a "dummy" receiver also available, this is a tool that will be useful for years. For multiple horses all needing training at once, check out the H2 and H3 versions. Good luck and Happy Training!