To Treat or Not to Treat? 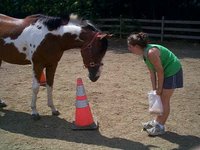 This month there seems to be considerable discussion about whether or not it's counterproductive to hand-feed treats to horses. The consensus is certainly that horse owners get at least as much pleasure out of the process as the horses do. I know it gives me a thrill to offer my guys some goody and come away with all fingers intact, so I'll assume I'm not alone in that, and I'll add my vote to that part of the question.
The bigger issue at hand, however, is whether feeding treats by hand (as opposed to dropping them in a bucket or flinging them at the horses from a distance) causes a decay in the herd hierarchy that currently has you (one can only hope) at Alpha Horse position. One article mentions that the natural behavior of horses among themselves does not include giving each other things. They relate in terms of what is pleasantly called "negative reinforcement" (or "get out of my clover patch, and I won't bite your ear off"). They teach each other how they want to be dealt with by issuing threats and warnings, not by offering up the best patch of grass as an incentive to better herd relations.
Now, I've been a clicker-training proponent for many years--ever since the rats in my college maze experiment learned to sit up in their cages when the light in the lab went on--and clicker training is heavily treat-based. Oh, eventually the trainer is supposed to segue from cookies (or in my case, frosted mini-wheats) to kind words and pats on the neck, but nothing says "Attention!" like the crinkle of a carrot bag, so food treats are the elemental driving force behind this incredibly effiicient stimulus-response method of education.
Thus a quadary arose. Should one abandon clicker training in defense of one's herd leader status, or should one risk insubordination among one's underlings in order to freely hand out treats, with and without fingers? I took the question to my advisory council in the lower pasture.
It happened to be pouring rain, so there was some discussion about whether the beast in the much-despised yellow, garage-sale, Pedigree Pet Products slicker was, indeed, a herd member at all, leading me to remove my hood and stand under a tree while the horses eyed me up and snotted their recognition. I posed the question: "If I treat you by hand, will you still respect me in the morning?"
Zip stared me in the eye and suggested that I'd be better served asking why they were standing dry under a tree while I was out in the rain. Pressed, he said he's content with the treat situation as it stands, especially when the treat is Stud Muffins and orange soda.
Pokey ignored the question. She's spent ten years learning (finally!) to smile for a cookie. She's not dignifying the question with attention it doesn't warrant and risking losing her cookie machine.
Leo snuck up behind me and put his chin on my head in greeting. "I respect you, Dearie. Truly I do. Did I hear something about dinner?"
Dakota and Pinky the One-Eyed Wonder Horse, Appys both and not prone to entering into discussions found a nice shrub and scratched their matching nether regions with abandon.
So much for advisement. None the wiser for the encounter, I headed back to the barn to start the dinner routine. The water and mud were knee-deep in some areas, forcing me to duck-walk to avoid getting water in my muck boots. By the third puddle, I thought I noticed an echo. A surreptitious glance over my shoulder showed me my little herd, lined up in order of rank, following along about a human's length behind me. I stopped; they stopped. I walked on; they walked on. Zip could just as easily have run me down going through the gate or stomped on my foot or splashed me with mud, but he didn't. Between me--Alpha Horse Extraordinaire--and Zip--Second-in-Command and Chief Bully--was a respectful space. I had room to maneuver around the rocks without risking a fall, and I went through the gate unmolested with the line of horses behind me. We'd marched about 800 feet without anyone getting out of line, stopping in the bathroom, begging for a soda or clobbering me with a sodden Jolly Ball. If that ain't respect, I don't know what is.
My conclusion, then, is that there's little connection between hand-fed treats and respect. The connection is between acting like a leader and being treated like one, and acting like a dufus and earning the treatment you deserve. Treat on!
Posted by Joanne Friedman, Freelance Writer, ASEA Certified Equine Appraiser, Owner Gallant Hope Farm at 3:55 PM