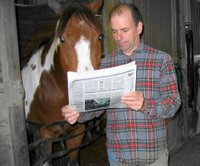 Zip here. That's short for Zips Memory. Dumb name, but no one asked me. She calls me "Zipperdoo" when she's happy. "Turd Breath" when I try to make her chase me. I'm okay with "Zip".

It's good to be outside again. It's been raining a lot. She won't let us out in the big rain. I think she's afraid of it. I'm not. I'm only afraid of that noise in the trees. She laughs and sends me pictures of little animals. I know better. It's a big animal. She's a little dumb about things like that, so I sometimes have to show her how to be afraid. Then she calls me "Turd Breath" while she's getting back on. I wouldn't have to yell if she'd listen better.

She's a good leader though. She made the nasty little black horse stay away from the fence when we were working near it. I didn't think anyone could stop him. He used to be nice, but he's mean now. She attacked him, and he stopped. Wow! She has magic that I don't have, so I'm good for her now.

I like this picture of me with my friend, Cliff. He doesn't talk much, but he lets me look at pictures. I like that. I like when She gives me orange soda. He never does that. Too bad. I'd like him better if he did.

I used to be in charge of the herd here before the little black nasty horse got mean. He thinks he runs things now. That's bad. He's a bad leader. He bites. You don't have to bite to be a good leader. You have to watch for animals in the trees and share orange soda. Watermelon rind is good too.

We do clickers. That's fun. I do things, and the clicker gives me cookies. I can pick up stuff She drops on the ground. She's a little lazy. She drops a lot of things. I don't mind. Cookies are good. I can sweep my mat with my broom. Breanna taught me that. She has a clicker too. And cookies. I can make "goofy horse" face, and I can take things that aren't mine and throw them at people. I don't get cookies for that, but it's fun anyway.

It's good that you are listening to me. I know a lot. I'll tell you some of it later. Now I want to eat.

Hold your horses, Bug Brain! You'll have lots of time to tell us what's on your mind before the thought dies of loneliness. Meanwhile, let's not forget who owns the feed scoop. She'll tell you when you can talk.