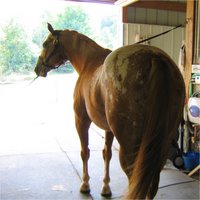 This has been a hellish weather year here in East Overcoat, New Jersey. It hasn't been dreadful. We weren't ice-skating on the hay field in January (thank GOD--last time we did that I was laid up for three months), nor has the Christmas tree patch turned into Lake Friedman with the Ickypoo River running in dirty rivulets through my neighbor's basement.

What's made it so awful is that is has been unpredictable. I don't care how many meteorologists they hire at Weather Central, they still can't tell me whether or not it's worth grooming and tacking up on any given day at any particular time.

Take now, for instance. It's Friday, July 21st. This morning I awoke to a big green splotch with flame-red patches creeping across my part of the TV weather map. I forewent the usual combing and makeup ritual, tossed on yesterday's barn clothes, and ran out to get the horses fed and in their stalls. And none too soon it was! Before I was back in the house some fifteen minutes later, the sky had opened and ligtning was ripping the sky in the direction of the next town north of here, headed my way with criminal intent.

An hour later the power was out. I, believing the map, thought this was to have been a short-lived storm, so I was still in flagrante disgusto. Wells don't like power outages. They get irritable and hoard their water so you can't flush or bathe or do any of the other ritualistic things we take for granted. The fans in the barn were silent. The telephone made odd chirping noises. I read two newspapers. Talk about icky!

Another hour went by, and the power was back. I waited a bit till the sky turned blue, then hustled the equines out to the pasture and readied their stalls for Round 2, promised for later.

The pondering began. I changed twice. Stripped and ran the water in the shower once. Watched the weather four times. Answered some emails. Heated up lunch while stripping, running the shower, and watching the weather. Finally decided it was safe to put on breeches and grab the horse most in need and least in desire of riding. Do I need to tell you that the clouds are rolling in and I can here, through the still-unwashed hair covering my ears, the gentle roll of thunder in the distance? There's no storm on the map. I shook the TV and cursed at the weatherman. How can we have a storm with no green-and-red on the map?

In a few minutes I'll change my clothes again. I can guarantee that the sun will be shining brightly by the time I'm out of the shower. I know this like I know that we won't ever have a blizzard like the blizzard of '95 again because I now own the biggest honkin' track-drive snow-blower ever made. I know this like I know that the power will never again go out for four days in a row because I put $4000 into a generator and appropriate wiring to keep my little chunk of heaven operational when it does. I know this because I'm looking out the window, and the sun is lighting the pasture, reflecting happy beams from the ankle-deep pond left by this morning's torrential downpour.

I'm going to go now. I'll throw on riding clothes, and--damn it!--I'm going to ride something, even if it's the tractor. I'll pick the horse that fits the synthetic saddle so I won't ruin my good tack (again). I'll ride in circles in the ring for twenty minutes like I did yesterday when the high for the day surpassed the prediction by 15 degrees leaving Zip and me sweating and glaring at each other.

Want to put money on how many minutes will pass before the next storm? I'm open to a little gamble about now.
Posted by Joanne Friedman, Freelance Writer, ASEA Certified Equine Appraiser, Owner Gallant Hope Farm at 11:57 AM