Harrisburg, Thanks For the Memory 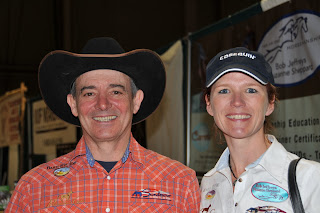 Sure I'm late on this. The Harrisburg Horse Expo was back at the end of February, some three weeks ago. But better late than never when it comes to horse stuff.

These are two of my favorite clinicians, Bob Jeffreys and Suzanne Shepard of Middletown, NY. If you have a chance to see them, join the fun of their Wind Rider competition, or work with either of them, you will be glad you did. And they're not paying me to say that. They call their training plan "Teaching Two As One", which is pretty much self-explanatory. Sounds like a no-brainer? It should be, but it's not. Logic would suggest that horse and rider need to work as a team, but if you've watched any of said "teams" lately, you'll have to admit that some folks aren't getting the partnership picture.

Which brings me to what I learned at Horse Expo '09: Teamwork!

Bob and Suzanne were not the only clinicians I had the chance to see during my two days in Harrisburg, PA. Tommie Turvey showed off his amazing ability to problem-solve while he put his trick-tained horse through its paces and helped some newbies work on their own animals in front of the crowd. His message was simple. Task analysis followed by a heavy application of patience will win you a reward every time. He demonstrated the first steps of training a horse to sit like a dog (not something I'm planning for Zip of the Inopportune Behavioral Experience) by starting at the fence. Backing the horse until it's tail is almost against the fence then asking for one more backward step will give the animal a quick seat on the fence next to your favorite Rail Bird. From there it's a matter of degrees until the equine version of "Sit!" has been achieved. Very cool and worth the effort if only for the heart-warming thud said rail bird will make when she hits the ground.

Meanwhile, Tom Burrell did a fine job of showing us how to unsour a barn sour or buddy sour horse. It was worth the trip just to hear him say that sometimes a horse just doesn't want to go down that particular trail at that particular moment, and it's up to the rider to determine both the why (or why not) and the importance of the teachable moment. He didn't put it in those words, but you get the drift. Then it's baby steps again. He likes to make cooperation easy and uncooperative behavior difficult for the horse so the animal will, out of sheer laziness (and a little trust in his rider) opt for cooperation. Then it's repetition, repetition, repetition!

Baby steps seemed to be the order of the week, and a better main course I couldn't have asked for. We horsemen are often in such a rush to move on, move out, show off, and have done with it that we turn our horses into neurotic messes. Somewhere between "Do it NOW!" and the folks who spend five years with a dressage trainer before they ever take a canter stride with their horse lies sanity.

Horses are good-natured but nervous for reasons that have nothing to do with us. It's our job to learn their world, their language, their currency, and use the knowledge to work with, not against them.

Go order a copy of Bob's new book from Horse Hollow Press, It's All About Breakthroughs, and get to work on the first baby step toward true partnership with your horse!
Posted by Joanne Friedman, Freelance Writer, ASEA Certified Equine Appraiser, Owner Gallant Hope Farm at 9:22 AM No comments: