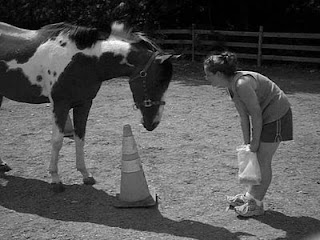 This picture is black-and-white, but the horse thing most definitely isn't. I had a revelation this morning that hopefully will stay with me when I'm not feeling so gray-scale.

I'm a little "off" this week due to an infection and its cure. Not sick, flat-out disgusting; just indisposed. Who cares, right? See, that's just the point.

When I turned the horses out this morning, I noted that Pokey is sporting her annual hoof abscess. We do this every spring when the rains come and the feet get soft and the newly-opened pastures invite lots of running willy-nilly over rocks. She comes limping in, I wave my magic Bute jar, and we do our best to get past the problem as quickly as possible. Normally I don't think much about it since she's retired, hence not being ridden. She can be as lame as she likes and just recover at peace. A stoic, it's routine for her to refuse my ministrations, gallop three-legged out into the pasture, and from a safe distance assure me that she'll be fine, no soaking bucket thanks. Her pain was obvious, so it was easy to go easy on her and empathize. But what about when it's not so flat-out obvious? How blind is blind?

I'm healthy as a horse (despite events that might contradict this, I actually am), and rarely if ever have an off day. So I'm not as empathetic as I could be. When I do feel raunchy, I just back it down a notch and cut my ride short or avoid saddling up entirely. More often I saddle up and avoid the laundry and grocery shopping, but that's between you and me. But how often do I (we) really give horses the chance to just feel out of sorts?

More and more often, as the economy continues to lug on the bit, I hear fellow horseman using the "S" word. "Should" is not a word that needs to be in a horse person's vocabulary. There's no horse that "should" be working six days a week come hell or high spirits even if his board is putting his owner in a hole so deep it smells like fried rice. There's no excuse for not noticing when a horse isn't really on top of things, and there's nothing in a horse's makeup that gives anyone cause to believe that they lie, malinger, or play hooky. Generally speaking, if a horse says, "Not now, I have a headache", he means it.

In his recent essay collection, Big Horses, Good Dogs, & Straight Fences, Mark Rashid relates a moment when one of his four-in-hand Belgian Draft team got testy and out of hand. Naturally it happened in public at a rodeo, so there were ample excuses to be made for the animal's misbehavior and the near-disaster it caused. It wasn't until the dust (or, in this case, the mud) had settled and Rashid had a moment to reflect that he took the time to check the horse's harness. The inch-long spike of hay that was embedded under the horse's tail, driven home by the harness's crupper, would have been invisible without careful inspection and the attitude that there has to be an explanation when a good horse goes wrong. There has to be. Look for it.

Today is as good a day as any to start listening with an open heart and a quiet mind when our horses complain. I'm not talking about spoiling or letting our horses run amok. Just listening. The trainers and owners who pulled horses from the Derby listened better than most, possibly because they have so much cash riding on their horses' continued good health and cooperative spirit. But the rest of us can take pause and look at our equine partners as if they, too, were Derby hopefuls whose futures might depend entirely on our decision on their behalf today.

When you feed tonight, take a close look and ask each horse "How you doin?" You might be surprised at the answer.
Posted by Joanne Friedman, Freelance Writer, ASEA Certified Equine Appraiser, Owner Gallant Hope Farm at 1:02 PM