"Middle Aged and Afraid to Ride" 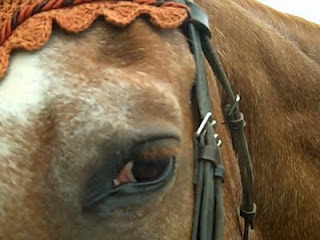 When I saw that topic in Juli Thorsen's blog today, I had to borrow it and comment on it. It's something that's been nagging at me this week. It's nagged so loudly that I ordered new sand for the arena rather than saddle up Zip for the battle I know is likely to come when I ask him to do things my way. Theoretically, he'll be happier with new footing and peace will reign. Theoretically.

The question is, is middle age (okay, so maybe I'm just a smidge past that into $2 Off For Seniors) causing my lack of enthusiasm for the fight? Is the sum of all the injuries, added to the sum of all the riding years, making me a dullard, albeit a sane one?

A week ago I visited my friend the Lovely Ellen Ryan, who showed me her new horse and commented on what a great time I'll have with him when he's settled in and I have a lesson on him. Ellen's faith in my riding ability is one of her more endearing qualities. About two years ago she allowed me a walk-trot episode on her big dressage horse, Tico, and despite being fresh out of chemo, I had a grand time. But staring at the HUGE (over 17hh) young Appendix Quarter Horse she just bought and watching his eyes wrinkle in that "worried" look some horses get, I wondered if I had the same worried expression. That's a really high place to fall from. Really high. She's got nice rubber footing (unlike my wet sand and road grit mix), so the impact would be less disastrous.

But why was that the first place my mind went? Why didn't it go to the incredible stride on that horse and his obvious natural talent and balance and what fun it would be to fly around the ring with him?

I realized as I thought about Juli's question that the creep of fear is insidious and not single-sourced. There's the leftover aching in my joints from injuries past laying the groundwork. There's my recent realization that the farm work isn't as easy as it used to be. There's the thought that has been behind much of my riding for the past 12 years that if I get seriously injured, there's no one to take care of the horses, so I have to do it regardless of my state of health. That's a biggie.

Does it start, maybe, at 55? That's when I started thinking about retiring from work, and I was pretty much healed from the fall off the loft ladder that caused me to buy one of every kind of back supporter ever made. I was still jumping Zip. Only 2-foot courses, but jumping nonetheless. That stopped when I had the last of the really big falls and dressage suddenly seemed like a really good discipline to learn to love.

Age doesn't seem to be a determining factor. I've known younger riders with far worse injuries than mine who kept riding at the same level and others with no injuries at all who simply slowed down. So it would appear to me to be a matter of personal issues possibly unrelated to but impacting on this horse life we've chosen.

In a few minutes I'll go find Zip in the pasture and saddle him up. Maybe we'll have a fight. Maybe we won't. We'll see. But quitting isn't in the cards. Yesterday Leo and I explored the back fields that I spent two hours mowing. I smeared us both with Cool Green jelly and off we went. But first we played in the ring...and we jumped. It was Leo's idea. Leo, at 23, lost interest in jumping a few years ago. Apparently his arthritis supplement works better than mine. But we had a wonderful time. The day before, it was Dakota doing crossrails (very, very tiny ones that don't worry his western spirit) and trails. Today is a new day and I'm going to try to keep that in mind when I hop on the Big Boy. Tomorrow is newer yet. Maybe middle age starts when we stop remembering that.
Posted by Joanne Friedman, Freelance Writer, ASEA Certified Equine Appraiser, Owner Gallant Hope Farm at 1:16 PM