I'd fully intended to send this video to Facebook, but I realized it would draw more comments from more folks who believe ponies live long enough to raise several generations of children and that no horse should ever be sold, and I wouldn't have had the chance to really put in my two dollars' (inflation, you know) worth.

Chico is obviously an amazing pony, and this video was made in part as a farewell memory for his young owner and in part as a sales pitch in hopes that Chico would wind up in the hands of another child who would love him as much as Scotty has. Word has it that he did just that.

The bond shown here is amazing, and it's a wonderful commentary on what can happen when wise, horse-smart parents introduce their children appropriately to a love of animals and give them the skills to be safe and happy in their horse lives. That ponies are outgrown is just the nature of the beast. It's not sad. It's life. And I can attest from experience that though Chico undoubtedly went through an emotional period of loss after he moved on, he most likely adjusted and was just as pleased to be fawned over by yet another child...and another after that until he reaches the end of the road and his forever home.

My daughter once bought a lesson pony. The pony proved to be too small for some students and too hot for others, so after two years she made the sad decision to send him on to a new home. We picked his buyer carefully, refusing the crazies and the insipids and settling on a lovely grandmother small enough to ride the pony and loaded with grandchildren who would also love him. But the pony wasn't nearly as sad as we were. As much as he seemed bonded with us, he was a total whore for any child under the age of ten, with or without carrots. He knew instinctively that kids were going to be his life, and he was more than fine with that. He didn't even wave goodbye.

So watch the video with an eye toward helping the children in your life form the same kind of bond with whatever animals you choose. Horses are not for everyone, but the connection with animals is.


On to the Race at Far 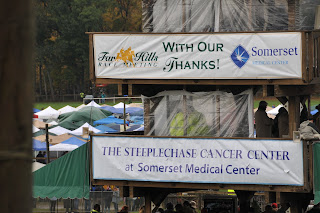 Saturday, October 17th, was cold, rainy/snowy, and without much merit overall with the exception of the running of the annual Far Hills Steeplechase. The races held that day were as exciting as they are every year, though the slippery footing left some jockeys shutting down when they realized they couldn't win. They get points for sanity. There's no glory in a steeplechase version of Barbaro.

This race card is more than just another link in the national steeplechase chain. Begun back in the 1950's as a thank-you to local farmers from the Essex Hunt, this particular outing is hosted at Moorland Farms for the express purpose of fund-raising on behalf of the Steeplechase Cancer Center at Somerset Medical Center in New Jersey. And a fine job it does! An annual event, the Far Hills Race is a gathering of the wealthy and the insane from the Tri-State who tailgate with elan and pay big bucks for the privilege. We were delighted to luck into reserved parking this year so we could join the happy throng of some 35,000 whackadoodle race fans.

Sadly, this being our first year, we didn't get that the rules on paper are just that. Next year we will know that "no open flames" does not preclude a four-burner, propane-fired kitchen range. "No canopies" is just for giggles, I'm sure. The only restriction actually adhered to was the "nothing larger than an SUV" rule, which made maneuvering around the other parked vehicles a little easier. One van in the melee would have created a gridlock worthy of and ABC News flyover. 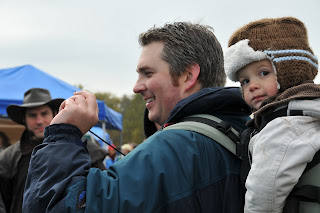 So is a trip to Far Hills in your future? I have already decided to keep my two spaces for next year and add as many more as I can manage so that our Homeless Race Fans' Tent City can be upgraded to the same level of style and class as this one below. The inflatable ponies eventually made their escape. 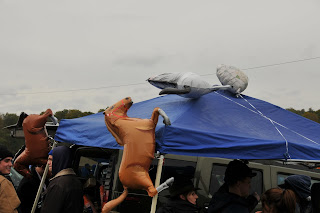 In case anyone is wondering, the winner of the high-dollar stakes race was a horse belonging to the Merck (Pharmaceutical) family, one of the rare occasions when a New Jersey horse actually won the New Jersey race. Since this meeting offers the highest purses of the entire national circuit, that's very exciting for the family and for NJ race fans.

Come next September, when your summer is winding down and you're beginning to look for ways to perk up your fall schedule, check the date for the Far Hills Race and sign up. We'll see you there!
Posted by Joanne Friedman, Freelance Writer, ASEA Certified Equine Appraiser, Owner Gallant Hope Farm at 8:53 AM

Chico, what a great video...
Damples I have always liked that look for a pony :)