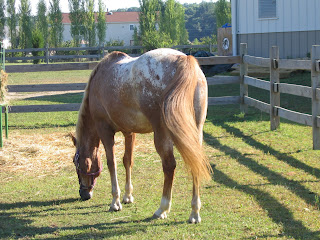 While we're on the subject of middle age and fearfulness, let's take a quick look at the fearless middle-aged horse. After all, middle age isn't just for humans, you know!

I said that a lot of fearfulness in riders of any age (but older, less sane riders most of all) comes from trying to ride the wrong horse. I suggested that as we grow old, our brain hairs wither and we tend to remember only the best times of our horse lives, the ones spent galloping around like lunatics, doing things our mothers didn't want us to do, making boarding farm owners old before their time. When that happens, we buy and try to ride horses that are too much for us. The result is often bodily damage (real or projected onto an internal screen) and fear.

So the middle-aged horse is a serious candidate for consideration when a middle-aged rider who might have some inky fear besmirching her heart wants to get back in the saddle after a layoff. Middle-aged horses are not their lunatic offspring. Not that there aren't Wild Willies in the "aged" group (that's over 12 in some circles, over 15 in others), but unless Big Buddy was kept in a stall his whole life, he's seen and done a lot more than his younger herd mates. Not as much scares him. Not so many squirrels in his woods (or in his head).

On the other hand, unless he's been run into the ground and is sporting a bunch of medical issues resulting from poor management, he's still got ample vim and vigor to make even the coldest heart cockles tingle with warmth. Want to go dashing through the woods bareback? He's probably a safer bet than Hooligan, who may get so excited he'll run you headlong into a tree, forgetting how much taller you are in the saddle than on the ground. Buddy will give you a run for your money, but at a slightly slower, more measured pace. Dakota, pictured here, is 18 now. You'd never guess it to look at him. Granted, he was never the most enthusiastic of horses, but in his dotage he is my number one choice for a leisurely ramble down the road. He's immune to traffic of all sorts including the kids from the neighboring high school who seem to think horses need to be honked at. He's also quite amenable to a barrel run, though his limit is three before he suggests dinner and a movie. And he'll happily pop over cross rails up to a height of four inches. I've tried raising the bar, but at five inches he stops dead and waits for me to lower the rail before he backs up and hops over.

Now, Dakota may be a little too quiet for most experienced riders. It's a matter of taste and how you choose to spend your saddle time. He's my guy for the challenge of the twisty back road with the trucks whizzing by. Leo, at 23, is my choice for everything else. Want to run? He's your boy. Want to jump a little? He'll do that too, up to about 18 inches (after which his arthritis makes him hop like a jack-in-the-box). And he'll spend all day wandering through the woods, delighting in the neighbors' kids' toys that blow freely past him and entranced by the contractor blasting foundation holes with dynamite. No fear.

Just remember that too quiet is as bad as too hot. When fear is your riding partner, you may over-compensate and opt for the least noxious horse on the sale site. A "pusher" is hard for an older, experienced rider to deal with as he may require all your energy just to get from the barn to the ring or the trail. If you're tired before you even get going, you're only trading boredom and frustration for anxiety.

Sounds like Dakota might be my perfect mount! I learned on a pusher, and was always exhausted just keeping him at a trot.

Pushing two years since I've been in the saddle. Maybe I'm too fearful to even try again.