A Different Slant on "Rescue" 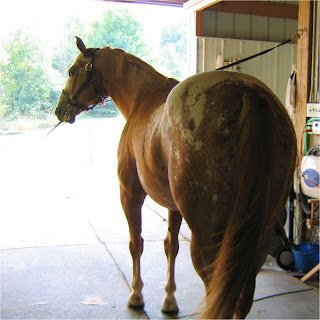 I've been delighting in following the exciting rescues and re-homings being done here in NJ at Camelot auction and elsewhere. It's been great fun donating cash to bail horses out of the kill pen and seeing them going to assorted farms for quarantine ("QT" in the parlance), rehabilitation ("rehab" for you novices), and finally re-homing to long-term, permanent placements with people who will care for them and let them live out their lives free from the threat of the dinner table. It's all good.

Yesterday, after I'd logged in and checked on this week's crop of kill pen horses and their fates, I got started on organizing my (horrors!) tax documentation. I have lots of documents, lots of expenses, income, deductions..and lots of stuff that's just plain money whirly-gigging down the barn drain. Oddly, that's my favorite part. That's the pile of vet bills, feed bills, farm supply bills, tack shop invoices, and equipment receipts that prove to me that my horse life is definitely healthy and completely insane by the average non-horse-person's standards. I make hay on my farm--that's my income-producer--and I have horses who eat that income as fast as it's produced and return nothing but more work and utter joy.

I'm not running a rescue operation. I'd like to be, but as a female of a certain age with a property better suited to being a private horse retreat than an active rehab and re-homing establishment, it's not going to happen in my lifetime. But I have six horses, and this connected in my mind with a post on Facebook about a re-homed rescue horse who, after some time with his new family, was finally coming into his own, showing his personality and relaxing enough to be happy at last.

When we say "rescue" we think about those amazing folks who haunt the kill pens and the auctions and do mass email forwards for private owners looking to get rid of horses they can no longer afford. We think of a network of big-hearted humans, and so it is. But there's a horse standing in my pasture right now who doesn't belong to me and is as much a rescue as any coming out of the kill pen, if only because his owner told me several years ago that she was tired of paying board and wanted her lovely, funny, healthy horse euthanized to cut expenses. I offered the option of a huge reduction in board so she's just barely covering his feed, and I kept him. He'll be here until he dies. I didn't really rescue him. Some of his expenses are being paid for by this owner. He'd already been here for 10 years, so he wasn't a new horse to care for. But he'll never wind up at auction. Neither will my foundered mare with pasture heaves who has been retired for 11 years, nor my arthritic Quarter Horse, nor any of the others. They're covered in my will, and they're in a forever home. Even the Appy gelding pictured above, who came from a good home at a good price and is a riding horse I enjoy very much, has earned a forever place here, which qualifies him as well. He'd been bounced around a bit before he came here, not abused by any legal standards (though there are some scars that could be explained by some previous owner, I'm sure), but also not real trusting. It took nearly two years for him to decide to be my pocket pony, emotionally rehabbed to the nines.

What I'm asking today is for the horse owners who read this to think about their own horses and consider the idea that if they offer those horses the loyalty and friendship they themselves have demanded, then those horses too will be rescued. Consider this pre-emptive rescuing! Don't sell that pony or send him to auction; keep him as a friend. Sure, he's an expensive buddy, but the best ones often are. And if you don't actually own a horse but would like to make sure that another one stays free of the kill pen, think about chipping in to help support a horse that belongs to someone who has fallen on difficult times and more difficult choices. No, it won't be tax-deductible, but neither was the last pair of shoes you bought, and for the same price, that pony could have eaten for a month or two. If you really love horses and can't realistically afford to donate cash to help one live a bit longer, consider offering your help, not just to a recognized rescue as a volunteer, but perhaps to a neighbor who could use someone to pitch in and make it possible for her to take another horse or keep one that's on the verge of being just too much to handle as aging multiplies his needs. Not a lifetime commitment, just a show of support that will feel even better than sitting around reading heart-warming stories about horses saved from a bitter fate.

You, too, can be a rescue worker helping our lovely horses find the peace they've earned, and you might be surprised to find that you're really the one on the receiving end.

NOW AVAILABLE! Horses Happen! A Survival Guide for First-Time Horse Owners is available for the Kindle. Visit Amazon.com and order yours now. I can't autograph it for you--ebooks are hard to sign--but the thought will be there.
Posted by Joanne Friedman, Freelance Writer, ASEA Certified Equine Appraiser, Owner Gallant Hope Farm at 1:32 PM