The Horse | Unwanted Horses: Rescue and Sanctuary Organizations Unable to Keep Up 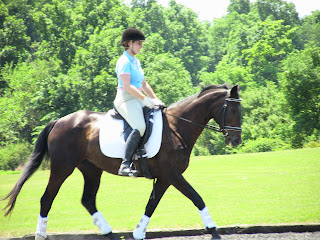 This was an unwanted horse.  This gorgeous mare was a freebie handed down to my daughter by our equine dentist about 15 years ago.  Her original owner passed on her when she was only 3 because she was "too hard to train".  The dentist handed her down when she was 5 because she didn't "catch" when he tried (once) to breed her.  Jess took her as a project with the intention of putting 30 days on her and selling her, but her issues and excellence have made her a permanent fixture, one which will eventually grace the stall I keep empty for her here. 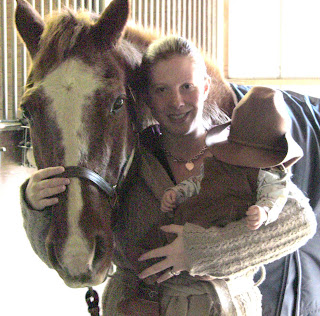 This was also an unwanted horse.  His owner couldn't handle him, ran out of money, and put him up for sale.  No one bought him.  I got him for $1000...what she owed in insurance and car payments.  He became a very interesting (horse people know what I mean by that) lesson horse and finally graduated to my dressage partner when he was 19.  At 25, he's still my buddy and still solid as a rock and energetic as any 10-year-old.  And he'll cart my 3-year-old grandson around over poles and circling barrels without so much as a backward glance.  He's the only horse I trust to stand in the cross-ties while I run to the house for a last-minute pre-lesson pee.

THIS was an unwanted horse.  He was rescued twice by the same woman and went on to win top honors at QH Congress in barrel racing.  He was a back-breather and a terribly stressed young guy when I first saw him.  He was the horse that had to go backwards into the pen for a while because he was so hot he'd blow up if he saw the barrel pattern head-on.

What all three of these horses have in common with each other and with my beloved (*cough, choke*) Zips Money Pit is that they are a little erratic.  A little off-center.  The TB mare in the top photo, my daughter's event horse, Dolly, is learning disabled.  Backing over the judge was her best event for years.  She did fine once we figured out (with the help, I willingly admit) of an animal communicator that she needed everything laid out for her in concrete fashion.  Cones, poles, barrels...anything that could direct her to the desired action.

The QH gelding, Leo, was spoiled.  Judging from the arthritis in his hocks, he might well have been a barrel horse in his younger years.  He's still quick and willing at 25, but at 15 he was a handful for his young owner who gradually reduced her contact with him to monthly carrot-fests and no riding at all.  When she listed him for sale as a "problem horse", she put a high price on him, and with good reason.   In reality, Leo was John Lyons Method trained and had all the talent anyone could hope for, but he was 15 and had no points behind his AQHA registration.  Only one buyer--a local dealer--came to look, and she offered pennies for what she considered a cheap "family horse" she'd only be able to get a couple of thousand for.  I offered a better deal.  My offer included a lifetime home where the former owner could visit, carrot at will, and pet heartily but never ride or own him again.

The third horse, also a QH, is Sioux's Native, grandson of Native Dancer and an ace barrel racer who had been burned out by over-training and idiot owners.  Bought (twice!) at auction by the wonderful folks in the photo, he wound up handed around and back at the auction through no fault of his own but totally through the fault of folks who hoped to hook their wagons to his rising star before he returned to his destiny in their home pasture.  Cynthia Pritchard Koeller has the belt buckle and awards to show for her caring attitude, but mostly she has this horse.

So, we come the long way around to the current situation at Camelot Horse Auction and other locales where the article below kicks in.  One man's champagne is another man's beer, or something like that.  There are reportedly 100,000 homeless horses PER YEAR in the US alone, and there's a system in place for dealing with them that benefits no one but the brokers and auction dealers.  If this isn't the time for a reassessment of horses in this society, I don't know what more we need.

Yes, it's possible to get overawed by the need and even more by the emotional level of the situation.  This is the time for clear-thinking and for the bookkeepers and auditors to take the reins.  It's lovely to see photos of needy horses online, delightful to hear the GOD SAVE THE BAYBEEZ! pleas, and enticing to note that a mere pittance can put one of these erratic creatures in your backyard, but it's not helping the situation.

Read the article.  Take it to heart.  Figure out a plan.  Move forward.  Let's really honor the place horses have had in our history and our present and what their presence does for many, many people.  It's about time.  Shuttling them from one auction to another, from "kill pen" (GAWD, I hate that ridiculous designation!) to Craigslist to slaughterhouse is hardly in keeping with our professed awe of the power and kindness that these animals have shown us as we built a nation--and a world--on their backs and over their bones.

I have been an equestrian all my life and, as an unmarried woman with no kids, I have devoted myself to animals. Over the past several months I have been drawn into the world of horse rescue and Camelot and kill buyers and the dreaded #10 feedlot. Have donated over $5,000 to bail horses for rescue groups to try and adopt out. It is an emotional response that I admit makes me feel good at the time but always nagging me is how wrong this auction setup really is and how these people are laughing at us animal lovers all the way to the bank. Horses near death are given a price of $700 to bail and with all the other expenses it comes to $1000. Last week I gave $500 to a rescue to save a horse from slaughter and he died a few days later in QT. He was 30 w/no teeth and choked on hay. He should have been humanely euthanized and never put on the auction block. There are so many laws being broken by this system and yet we canonize Frank at Camelot because he lets rescues in. I don't have any answers but I wanted you to know I understand what you are saying-you are being logical but the topic is so emotional that no one can hear you.

That's a heart-breaking story. Sadly, that sort of thing is happening over and over. Like you, I believe this system isn't benefiting anyone but the broker. Frank knows it. We know it. But the core group refuses to see it. Such a shame...

There are two tracks that a horse can be brought into NJ: for resale or slaughter. If horses are brought in for resale, you need a health cert. If the horse is on the slaughter path, it doesn't.
So Frank the old crank, is a shrewd businesman who probably has his first dime, brings EVERYBODY in on the slaughter path because it saves him money. I understand from someone at the agric office, here were Frank's words: I copied them verbatim.
"If you people make me get health certs, I will send them all to slaughter."
" I was just trying to do something nice.If I have to get health certs it will put me out of business"
WAH< WAH! WAH!

If any of your rescuers think that this is about "nice" you're deceiving yourself. He's making it hand over fist despite his cries of poverty, and he violated the HC law as it applies to NJ and continues to do so.

He's been a kill buyer for 30 years. He never gave a damn before, but now he has a nice litte niche market.The documented results besides all the happy adoption stories: horses died from disease because no cared about the shape they were when they left New Holland. Sick horses went through Camelot. A woman in West Va got a bunch of sick horses shipped to her. And why? Because of some of the incompetent rescues which NO ONE wants to accept responsiblity for, horses were given to people who couldn't afford them, some were left to rot in fields and one "save the babies" rescue diverted its funds for personal use. Why should anyone have any faith is this whole facebook rescue mission is beyond me. No one really knows where their money is going?

Writing to the the NJ AG's office makes the rescues like the whiners, they complain about. If you were all so sincere about REALLY MAKING A DIFFERENCE, stop the problem at its source: NEW HOLLAND. But hey, that takes real guts to take on PA and certain rescues have a nice profitable business going for themselves.

Well, THAT'S a load of enlightenment! I hope readers will heed the warnings.