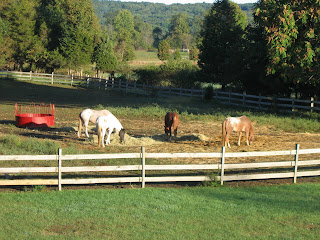 Never forget, though, that you are not a horse.  They don't see you as a horse or a part of the herd.  That's a misconception that can get you killed or make you look stupid to your neighbors when they see you walking around with the horses, pretending to graze.  They see you as another critter, part of their world but slightly outside the herd, and one from whom blessings and craziness flow.  Work with that.  Your aim is Controlling Executive Partner, not co-worker.
Visit the herd and watch them for a bit.  When you’ve figured out the hierarchy, make your move on the leader’s spot.  One day you may, as I did recently, be startled to find the entire herd lined up behind you in order of importance as you walk from the pasture.  It's an interesting experience and leads to a much better relationship on all sides.


Networking the Human Herd
But I mentioned Facebook, right?  And some readers are probably curious to know why.  It's ironic that the social networking sites seem to completely defy the dynamic.  Some research has been done into the phenomenon, but there's nothing conclusive thus far.  What's obvious is that the "Best Decider is King" rule doesn't hold water online.  Perhaps it's the anonymity factor.  Perhaps it's the fact that the written word at best, when wielded by a pro, still only carries about 10% of its intended meaning forward to the reader.  Flung about by the less-than-verbal poster, it carries less but sometimes has more impact.

The online herd is generally cowed by the loudest, angriest, most-able-to-find-the-Caps-Lock-button rather than the one most able to make good choices for the herd.  This herd isn't being led to water or good grazing, isn't trying to set up a village or a business.  Generally the online networking herd is just looking for diversion and support.  From strangers?  Sure, why not?


It would be helpful if all the online profiles were factual, because the upshot of this dynamic is that the best BS-er sometimes appears to be the best option for one of the Leader roles.  At one time or another everyone who has frequented an online forum or a networking site has come to that Ah-HA! moment, recognized someone's leadership skills, bowed deeply, kissed the ring...and then been gob-smacked when the Chosen One has been shown up as a 60-year old pervert or a 16-year-old pervert wannabe.


In time the research will catch up with the Networking Effect, and the results should be intriguing.  Wait for it!
Posted by Joanne Friedman, Freelance Writer, ASEA Certified Equine Appraiser, Owner Gallant Hope Farm at 11:15 AM