Stress and the Thinking Horseman 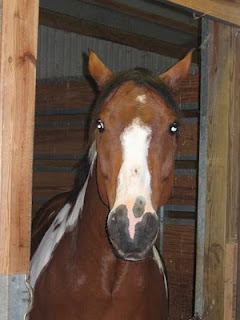 Most horse owners are aware that overwork can cause their equine partners to feel stressed.  We’ve all heard the admonitions against long trailer rides, heeding the warning to let the horses rest every few hours.  Recent research has shown that horses actually don’t enjoy those short rest stops and are perfectly capable of riding in a trailer for more than eight hours at a stretch without any more stress than they feel after a much shorter ride.  Let’s face it, for an animal designed to roam the plains with his buddies, scarfing up an endless buffet of greens, any trailer ride is stressful.  Sparky would be happier left to his grazing despite your belief that he really “gets” the whole competition thing or knows in his heart he's going to a better place.  Five minutes is as bad as five hours when you're a horse and can't control your situation.

Translated, that means someone did some research on how homebody horses do with a lot of trailer time.  The answer is, "not well".  Even a seasoned traveler still shows signs of stress in the form of increased cortisol production.  Cortisol is that nasty hormone that makes us humans pack on belly fat when we're unhappy and under stress.  It's not good for horses, either.  The study revealed that though "heart variables tended to decrease with each trip, indicating adaptation to travel", cortisol levels remained high, indicating that these were not happy campers.

So it follows without any stretch of the imagination that a rescue horse that has been shunted from home to dealer to auction to quarantine to rescue to your backyard is about as stressed as he can get even if he's spent his life traveling to shows.  And that level of travel-induced upset, added to changes in diet and possible mishandling over a period of time, topped off with exposure to illnesses and the possible subsequent treatment thereof....well, is it any wonder some of the horses just don't survive the help they're given?

But even if your horse never sees the inside of a trailer, stress happens, and the signs are often easy to miss.  The following changes (collected from The Horse, Horse and Rider, Equus and other sources ) can signify stress:

None of these absolutely indicates that stress is the cause.  If Warthog has cribbed since he was a youngster, then cribbing when he’s eighteen isn’t news, it’s habit.  If he’s always been a picky eater, and you’ve recently changed feeds, then turning up his nose at his new grain ration isn’t a change.  We’re looking for unexpected and otherwise unexplained changes in your pal’s demeanor and behavior.
The causes of stress are as numerous as the signs:
These are grouped into categories:

As you look at these lists, it should become apparent that some stressors will naturally lead to particular behaviors.  Recently on an equine discussion forum a poster mentioned that her horse was suddenly going ballistic in his stall.  It took the poster some sleuthing to discover that a loose electrical connection was creating a stray EMF (electromagnetic field), which was freaking out the sensitive animal.  Ever clip your horse while you were both standing on a wet wash stall floor?  My poor mare developed a nervous tic from the zing! she was getting every time the ungrounded clippers touched her.
Rain rot, a common bacterial infection that results from poor grooming and too much time in the damp, is generally easy to cure with a mixture of petrolatum and iodine and a good rub with a nylon kitchen scrubby.  Add a new barn with hostile pasture mates, however, and you will find, as did a friend of mine, that your horse is covered head-to-hoof with large, weeping sores despite your best efforts.  A vet call and oral antibiotics will generally cure the infection, but only a change of venue will keep it at bay.
The important fact you must not ignore is that what’s stressful to your horse is not necessarily even on your radar.  A hawk killing a rabbit in a field near the riding ring might be of only passing interest to you, just another Nature at Work moment.  But to an already-skittish mare, that incident might foreshadow something larger and meaner lurking in the treetops.  Horses, you know, can't see above them.  When she suddenly goes from long-and-low to stargazing, another round with the draw reins might convince her you can’t be trusted to keep her safe.  Thunderstorms might get a big “so what” from the herd as long as none of them has ever gotten zapped.  My entire herd—even the ones who didn’t live here at the time of said incident—has taken to rushing to the barnyard gate at the first rumble ever since the time a bolt hit a tree, ran down the trunk, through the ground and up to the steel bale feeder where the residents at that time were gathered for an evening snack.

Added to the mix is the relative sensitivity of individuals equines.  Last week, for instance, I pulled 15 ticks from the soft underbelly of my hypersensitive Zips Drama King.  He flinched, fussed, and threatened to swoon for two days afterward.  He would only travel to the left.  He asked for (and was denied) a special audience with the Famous Trainer of his choice. The next day I pulled 10 from his buddy Dakota.  Not so much as an eye blink ensued.  Individual differences are huge in diagnosing a problem, and they complicate dealing with an unknown animal a nearly otherworldly experience.
Overall, you need to think like a horse.  In a recent interview, Ray Hunt cautions riders and trainers not to maintain a predator/prey thought process when working with horses.  I agree that we need to see ourselves as partners, but we also need to keep in mind that horses are prey animals.  They are sensitive to threats of all kinds in their environments.  They are herd animals, so the extended family group is all-important, and changes within it are as hard on them as the new in-laws were on you.  They like to feel safe and comfortable, so changes in their routines, their living quarters, their turnout are all upsetting to them.  We lost three horses in a few months—one to euthanasia and two who left for greener pastures.  During that time, each departure of my daughter’s trailer took another long-time pasture pal away, and the trailer returned empty every time.  It took more than a year for Zip to stop freaking out each time he saw that trailer.  It didn’t take a genius to figure out that he was worried that next time it left, he might be aboard and headed for parts unknown.  There’s a lot of speculation and some research afoot regarding whether or not horses can think at a level high enough to fear death.  Anyone who’s ridden through a sensitive horse's maniac-squirrel spook knows the answer.
Be aware.  Think twice before you punish your horse for something he can’t change.  That too—inappropriate or unearned punishment—is stressful for your buddy.  When you see the signs, set your agenda aside and look for a cause before the problem becomes chronic or dangerous.
But there's another level to this issue.  With the economy frozen and horses wandering the land like vagabonds begging for homes, many people are winding up with horses for whom stress is simply a given.  How is an owner of a horse in this condition supposed to tell which behaviors are habit and which are stress-related?  It's not easy, and there's no magic mirror you can look through to find out.
But given that idiosyncratic behaviors are incredibly difficult to change--intermittent reinforcement is the bugaboo here, and it's impossible to live with your horse 24/7 to make sure you catch and extinguish every single episode--it's possible to assume that if you're able to get the horse past it quickly with some down time and calm attention, it's probably stress-related, not a long-term habitual response to his life.  For a novice owner of a rescued horse or one with a dubious history (What....sellers aren't always honest?  Really?) this can present quite a serious situation.  An owner without the long-time experience to know how to extinguish behaviors through training is likely to feel overwhelmed by the sheer volume of crazy that accompanied his new horse off the trailer.
This is where experienced horsemen and rescuers can really shine.  Naturally, a novice's best bet is to buy a horse that has a known past that can be checked and rechecked with former owners close at hand to answer questions.  Even in my dreams, that's a stretch.  But taking a horse from a rescue that does rehab at very least and retraining at best is a fine place to start.  Novices should shy from the unknown as readily as Zips Bizarro shies at drifting oak leaves.  And a novice in a boarding situation where one horse is all s/he can afford, where there's a weak support system to help him over the hump and lots of "Do you know what your horse did?",  is just a mess.  Period.
Full screening of adoptive homes is possible for rescues and should be the rule, but the game is over if novices are going to jump the gun and buy a horse without proper vetting of horse or home. and without the information they need to make a good decision.  My best recommendation is that that situation be avoided at all costs, even if the cost is a horse having to wait for a more experienced owner closer to home to come along.
Posted by Joanne Friedman, Freelance Writer, ASEA Certified Equine Appraiser, Owner Gallant Hope Farm at 10:42 AM