Funding, Fund-raising, and the Business of Charity 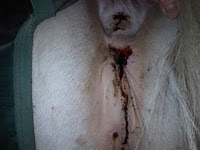 Today's photo unfortunately reflects a negative report.   The red dot on the lower left is both the site of one of the implant incisions and a bit of the underlying tumor beginning to peek through the skin.  The photo was taken a week ago.  The spot is larger now, roughly the size of a dime.  The charming Dr. Fazio checked her two weeks ago on Spring Shots Phase I Day and pronounced her possibly slightly less tumoric than previously and we were both content that the growth appeared static.  But the difference, if any at the "static" level was minimal, and the obvious lesion that's apparent in the earlier photos had not been reduced.  Today, on Spring Shots Phase II and Other Veterinary Exercises Day, it was apparent that one of the internal lesions has externalized.  In other words, she has another pop-out.  This is not good news.  The summary at this point of the treatment program is that it was ineffective.  Since this is only one case, there's no real conclusion to be drawn.  But for this case, implanting cisplatin beads without removing the (inoperable) tumors has no notable effect.
On to the Subject of Money
like this frog.  He's a polite visitor to my deck railing.  He's handsome, quiet, and kind.  I could easily have a whole flock (flock?) of them if I could build a massive terrarium with trees, dirt, flat-screen TV... all the cool stuff gray tree frogs love.  In fact, I could probably coax one or two of these cuties to breed, and I could sell the kids for money to dump back into the project.
So, what's to stop me from asking my friends, family, and other people who would soon hate my guts to give me money for this project?
Simple answer:  Nothing
Anyone who wants to risk destroying relationships can ask anyone for money.  There is no law forbidding it.  Never has been.  Loans and gifts among friends and family are common.  Not always a good idea, but certainly common practice.  Making that call to Aunt Louise to ask for that last thousand you need to pay Little Maryjane's private school tuition for this year may be embarrassing, but it's something that happens every day.  That is fund-raising in its most elemental incarnation.
A step up from cadging cash from kith and kin is the art of arranging funding for a cash-producing business.   This, too, is fund-raising, but on a much higher level with fewer contributors (not "donors") involved, and the end result a cash flow that is positive for the person raising the funds and for the  check-writers doing the funding.  This is the category that includes investment bankers, "Angels" who step in and save the shirts of folks whose business ideas they believe in, and even includes silent partners and others who have a nominal involvement in the birthing of a business venture.  Venture Capital is the name of the game.  In fact, should you be so inclined, there is a new bevy of websites where entrepreneurs with The Next Big Idea can be connected with Angels willing to throw money at them to fund the projects. Though mixing with the wrong Angels can result in death and other problems, the money can basically be used for whatever purpose the venturer chooses.
Charity is the next level on the pyramid. The previously-named income streams are in no way to be confused with charity donations.  A charity is an organization that, while it may pay its director or CFO a salary, uses the majority of the funds raised for the purposes outlined in the Charter, Business Plan, and Mission Statement that were developed and in some parts submitted to the IRS for approval so that the organization can be held above the tax law and every penny that comes in can be directed at the target, whatever that might be.
Within the Charity group, there are a few questionable subsets that change depending on the state within which the organization (I use that term loosely) operates.  We have your basic full-fledged Charitable Foundation or Charitable Organization, which, fully approved and sanctioned, receive their tax-exempt label courtesy of Section 501, Paragraph c, Item 3 (or whatever) of the IRS tax code.  Though there's not much oversight, there is paperwork, and donations to such groups are tax-deductible for the donor.  In New Jersey (and probably other states beyond the borders where I never go) there are also Non-Profit Organizations (like the Boy Scouts, the 2011 Senior Class at Erstwhile High School, etc) which raise funds for specific goals within the organization and to support the organization itself.  And there are Not-for-profit Corporations, whose workings are a little mysterious.  These are actual incorporated businesses that raise funds which are used for projects and from which no individual  within the organization benefits.  The paperwork here gives a good indication of what is required of such a corporate entity.

The recent insanity surrounding the Thoroughbred Retirement Foundation (TRF) which is funded by the Endowment set up by the Estate of Paul Mellon, racehorse owner and breeder, is a great example of how far-flung the accountability for the actions of a charity can be.  The people overseeing the endowment (most likely family lawyers or possibly family members) probably only kept notes on the amount of cash released from the estate and the amount the principle rose or fell with the stock markets.  The TRF probably only kept notes on how much money was passing through their hands.  No one took notes on where it went.  So the caretakers of the retired horses that are spread across several farms in several states apparently caught the shot end of the audit trail and the horses didn't get fed.  Of course, the case is pending an investigation by the Attorney General of the State of NY, so the above is "hypothetical" (as in "that horse is hypothetically dead because it's hypothetically not breathing or moving").  But the picture is still a good illustration of the point that you can never be too sure where your money is going , and if you're the one diverting it, you can be pretty sure you'll get caught no matter how big your britches are.
If someone asks you for money to support a pet project (or a pet, for that matter) and they are not a registered charity of any sort, you are not making a "donation".  This is not a "private charity".  This is somebody who wants you to pay for something they can't afford.  If you are willing to do that, great.  But don't expect anything in return, including thanks.
If someone asks you to contribute money to help fund a project that may eventually be profitable, then you are not making a "donation", you are providing funding a la Venture Capital.  Expect (and demand) a payback.  Sign something.  Make sure you have a lawyer handy.  Expect to lose the money if the venture fails and gain something if it succeeds.  This is the sort of thing that goes on on TV reality shows with Donald Trump in attendance.  It also happens quietly behind closed dining room doors among friends with far better hair and less money than the Trumpster.
If you are asked to donate money to a charity, then you should at least qualify to deduct that amount from your income on your tax return, and don't let anyone make you feel guilty for asking about that.  For the top tax brackets, you only actually save up to about 34% of the donated amount, but it's better than nothing.  It's Uncle Sam's little gracias for not having to send the money himself out of the straining tax coffers.
If you donate to a group that is using the cash for purposes not quite clear to you, then you really need to think hard about why you're so anxious to toss your paycheck in their direction.  Are you supporting a mutual goal?  Are you invested emotionally in the process?  Does this all have some ethical meaning to you?  Or are you simply poorly informed?
Finally, if you are on the asking side of the equation, what are you doing?  Do you really have all your financial ducks (and marbles) in a row?  Do you realize that simply asking for money for what you consider a good cause does not make you a charity?  Do you get that a bad business plan isn't better just because it's not profitable?  Do you know that you can't send your minions out to collect money on your behalf without registering them with the state as Official Fund-Raisers?  That you cannot allow someone to use your tax ID number to skate out of paying their fair share?  Do you get the whole picture, or are you just having fun gathering money and friends and playing at the Name That Charity game?  Think hard.  The authorities spend all their time doing just that, and you do not want to be what they're thinking about.
Posted by Joanne Friedman, Freelance Writer, ASEA Certified Equine Appraiser, Owner Gallant Hope Farm at 12:44 PM

Brillant as always! What a gift you have of educating and pointing out the truth