The Equestrian Snob Needs a Clue 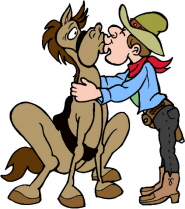 don't know that Mike Rowe would make a great President, but he would definitely be high on my list for several other positions currently inhabited by useless oxygen suckers.
It's been bothering me a lot lately, but it wasn't till I read the interview linked above that I could put a name to it.  When did we horse people--muck-stained and foul-mouthed as we tend to be--start looking down our noses at blue-collar horses and the professionals and skilled workers whocare for our equines?  It seems as if somewhere around 1983 we moved from everyone wanting to be a cowboy and just hang out on the prairie spitting tobacco with a horse friend, to everyone wanting Olympic gold and the horses that can bring it home.  Years ago I came across a cartoon that showed two little English-helmeted girls aboard ponies.  One said to the other, "I'm going to be a lawyer when I grow up so I can have a horse."

Nowhere is the split between the white- and blue-collar ends of the horse world more evident than in the way horses are being dumped on the market and the way farriers, vets, bedding and footing guys, barn contractors and the rest of the support team are treated by the owners who couldn't tighten a clinch or build a saddle or a stall if their lives depended on it.  When did those infinitely more necessary people and horses become unworthy of polite treatment and respect by the soft hands that write the checks?

Once upon a time, my lovely daughter told me that she didn't need to pay the big bucks for an AAA membership because her fiance drove a Mercedes and people with Mercedes also had cell phones.  My response, "And who do those people with the Mercedes and the cell phones call when they get a flat?  Mommy, because she's got AAA?"  She signed up soon after.  But that was a telling shift in the social environment.

Mike Rowe makes a statement at the end of the interview that should resonate across the horse world and beyond.  He says, "You've got a lot of very, very smart people standing by waiting for somebody else to do the work. Not a recipe for long-term solvency in my opinion."   Not a recipe for long-term success, either.  There you are sitting in your suit in your office at your job with all its benefits and upward mobility and Vente Lattes delivered on cue, and what's the point?  The point is to be able to afford to pay your mechanic, plumber, contractor, shoer, vet, hay farmer, feed store owner, boarding farm manager, delivery truck drivers, long-haul truckers and all the other working stiffs who make your life, equestrian and otherwise, possible.  Think about it, and wonder what would happen if they all pulled the plug on you.  The richest guy in the world can't find his alligator shoes if the lights won't go on because the electrician opted to play golf instead of finishing the wiring for someone who can't be bothered to pay the bill on time.  And that Maserati won't run with a blown head gasket and no one handy who's familiar with the functional end of a wrench.

In the end, we're all working for the blue-collar worker and the unheralded equine professional.  The richer we are, the more people we keep in our blue-collar stable.

So maybe Mike Rowe's got it right.  It's time for a paradigm shift in this country back to respect for the folks who make it all hum.  Let's have a "Hug Your Plumber" day.  Send a note of thanks to the vet who showed up on a snowy Sunday night because you couldn't flush out your horse's impacted innards on your own, and make a promise to never let things get that far out of hand again.  How about a word for the shoer you never saw before who did a quick tack-on for you at a show?  Did you even bother to get his name?  I occasionally get calls pandering for donations or asking for financial advice, but those callers' voices don't have the panicked, shattered-glass tone of the ones who call my partner, Mechanic Cliff, because their truck or tractor or trailer or whatever is dead in the water.  That's where the real power lies.

And let's take it another step into the barn and stop criticizing owners whose horses are nothing special on the Flash Scale but who haul their owners happily around the trails and let them have the experience of being a little closer to nature.  Let's save that critique for the shiny-booted fools who can't properly groom or tack up a horse, but who can hop aboard and bring home the blue with a sneer and a golf wave.  Let's question why there are so very, very many breeding programs still going full-bore, all in search of the perfect genetic outcome when in reality what we need is sound, solid, well-trained horses that won't hurt themselves or anyone else and will bring as much utility and joy to their situations as any high-end import, and maybe more. 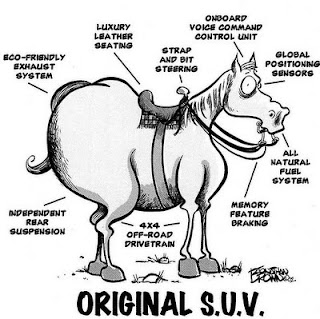 My soapbox is getting creaky, so I'm going to go out and thank my barn hand for putting tires around the new sink hole that opened up in the barnyard so the horses won't be needing the vet today.  Then I'm going to sit and think for a bit about how we've complicated our lives to the point where only doctors and lawyers, bankers and corporate mucky-mucks deserve our respect and how they're able to steal from us with impunity because the stars in our eyes are blocking our view of reality.
Posted by Joanne Friedman, Freelance Writer, ASEA Certified Equine Appraiser, Owner Gallant Hope Farm at 9:38 AM