Take Me Back To The Sixties...Please!

Take Me Back To The Sixties

Watching the video linked above is mandatory, especially for anyone under the age of 40.  As usual, I'll wait.... 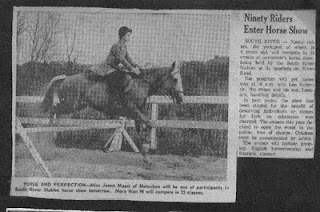 The photo on the left is me, circa June of 1963.  The horse's name I don't recall, so we'll call him Buttermilk.  That would have been a typical horse name in 1963 because Dale Evans was still Top Cowgirl.  Note the "hunt seat" style.  Note the ineffective helmet perched precariously on the back of my head.  Note the skirt-like flare of the jacket.  I was smokin'!  I won all my classes (all two of them, since parents weren't into paying big bucks for kids to show off their skill on school horses back then).  This was an open show, the only kind we had.  There were probably 100 competitors in the entire show, and it was one of the larger ones apart from the Garden State Horse Show that I wasn't allowed to compete in because my parents, for some bizarre reason, thought college was more important than showing off my instructor's horses.

You're probably all giggling and thinking, "When you got old, b*tch!"  But you're wrong.  It stopped for me when all the rules started.  It stopped when horse kids took a passion and turned it into a lifestyle and an obsession that I couldn't afford.  It stopped when George Morris told us we had to wear $100 breeches for schooling or risk looking shabby in the eyes of....who?  Him?  I don't recall The George ever showing up to my lessons while I was having fun in my Wal Mart leggings and second-hand boots.

Sure, the helmet thing is a mega-plus.  But back in the day of little metal, velvet-covered pots with elastic bands holding them on our heads, I never suffered a concussion.  That's because I didn't have feisty horses and high expectations that caused me to overreach.  I rode horses that wouldn't hurt me and considered two feet an outstanding jumping effort.

My point du jour, however, is not to whine about the state of the horse nation.  It's just to suggest that those of us old enough to have memories (and young enough to be sure they're actually ours) should occasionally dust them off and beleaguer our children with them.  Handle them gently, because they are truly priceless.  The cast-metal horses broke off the tarnished trophies years ago in one move or another, but the recollection of the horses in my life, the people who lived through those times with me, and the utter joy of breaching some personal roadblock will remain the guide for my future horse life, such as it will be.

The AQHA was founded in 1940.  The rest of the breed associations are far younger.  The USET goes back to 1912.  The USEF came along in 1917.  But until the Interwebs joined the public marketing plan around 1971, we peons were blissfully unaware of our failings.  In fact, as horse-crazy as I was as a kid, I knew far more about Alec Ramsey and his horse The Black than I did about the ruling organizations in my own sport, and I wonder now where those top riders came from.  They certainly didn't come from the ranks of my fellow horse kids.  I don't think I knew any of those athletes' names until the mid-70's.  I was too busy filling out "Name the filly" contest entries and dancing to my LP (monaural, please) of the Commanders, though I did stop to watch the Derby and the Olympics.  And I didn't get a grip on World Wide Webbing until I'd finally upgraded from a Pentium 75 that allowed plenty of time for bathroom breaks and lunch during chat replies.  That was in the 90's.  Mea culpa.

And that's when the Fun Left the Building.  I liked it better when I didn't know I was doing everything wrong.

So I'm going to spend the day happily reliving my ignorance while I can still remember it.  I hope you all had a fun weekend whether in Derby celebration, Mother's Day gratitude, or just hanging around.  Happy Horse Day!
Posted by Joanne Friedman, Freelance Writer, ASEA Certified Equine Appraiser, Owner Gallant Hope Farm at 9:29 AM

Oh, me, too! My ignorance was my bliss.

Get me on a horse, please, with no expectation other than enjoying the very simple pleasure of being on a horse.