Living at the Speed of Silence


The power came back on around 2 or so this afternoon.  It went out, courtesy of Hurricane Irene, around 2:30 Sunday afternoon.  I'm writing this on Tuesday to post on Wednesday, by which time we will probably have forgotten the entire episode.  We went a whopping 48 hours without electricity.  Actually, that's not quite accurate since I'm one of those who "got".  I got a generator after the Big One in 1999 took our power out for four full days.  That was the year the guy across the street got to watch me take a bath in the rainwater in the horse trough.  That was really ugly.

This wasn't so bad, as it turns out.  At least not for me.  Not for me and my horses and my chickens and my Domestic Partner (he hates that, so I throw it in at every opportunity) and my cockatoo and cockatiels and cats.  It didn't even faze the fat groundhog who thumbs his nose at me from the woodpile every day.  Yes, I swear he has a thumb and knows how to use it.

What really happened here was a shift, subtle and imperfect, but clearly felt.  We've never had a major disaster in this area.  Not at my house, anyway.  The folks in Sparta on Glen Road had one a few years back when a heavy downpour took their road and shoved it into a gully.  We were at a horse show at the time and heard about the shoving after the fact, but for the Glen Road people, it was immediate and scary as shit.  We were horrified in a distant, made-for-TV-movie kind of way.  This time we got really, really quiet because it was our personal brush with missing our next mani-pedi.

What Irene did in the surrounding area was quite nasty.  She put a lot of water where there wasn't any.  She moved a stream in Vernon from one side of the road to the other requiring bulldozers to undo her decorating faux pas.  But at my house she was quite pleasant.  Wind, heavy rain and that sort of thing--almost romantic as we huddled and whispered so Irene wouldn't hear us--but none of the small preparations we made to ward her off were actually necessary with the exception of the very nice Bloody Mary I had after I'd weed-whacked along the driveway so the emergency personnel wouldn't be put off by my laxness if they had to rescue me.  Okay, maybe cutting down the dead tree that would have fallen on the power lines was a good thing, but did the Cockatoo really need a bath in case he wound up in a shelter?

["Did you see that?  Nice place, but it looks like she hasn't manicured her retaining wall in weeks!  Tsk!  There are poor people who would kill for that wall and the whacker to de-weed it...."]

The generator proved to be our most effective measure in the battle against nature for our little corner of New Jersey.  The big red lump that I've barked my shins on grabbing for the leaf rake became my bestest buddy with one or two pulls on the recoil starter.  We had lights when others around us were in the dark.  We had TV and phone and internet service.  The wind howled and I peeked out at the barn from time to time to make sure it was still roofed.  We listened for trees crashing that might mean fences gone.  Mostly we kind of hummed around the house reminding each other of the things we might have forgotten.

But at night, at 9 PM, when Cliff turned the key that shut off the genny for the overnight and we took ourselves to bed in the total dark and silence, there was a different feel.  Not scary, not ominous, just smooth.  Quiet is very quiet indeed when there's no buzz-hum of lights and cycling of pumps and such.  The wind was louder and the silence was deeper.  That first night was a very good night for sleeping, and we slept deeply and with that exhaustion that comes of mucking stalls in the dark while horses munch on their hay and which follows all those preparations that didn't stop till lights out the night of Irene, Saturday  night.

Last night, Monday night, was amazing!  More perfect weather I couldn't imagine.  The pink sunset set off a gorgeous, breezy afternoon.  Luckily for us, damage was minimal, so we luxuriated in the horses in their green pastures and all the goodies that Genny brought to the table.  We ate terrible tuna salad (I'm not very creative under pressure) and talked about a few details of repair.  And at 9 PM we both gleefully announced Lights Out.

The peacefulness of these silent nights has been seductive, and today when I hied myself off to buy more bread for more tuna salad in days to come, I was excited.  I by no means want to denigrate the real trials my nearby neighbors are suffering through, but for me this was something else.  Challenge met, foe bested...no, not really.  For a little while, though, I heard my horses breathing again.  I saw the world of near-silence through their eyes.  I liked what I saw, and I was looking forward to moving deeper into this space the storm made.  Me and my tuna and my bread and the silence.

Then the power came back on.  To say it felt like an intrusion seems ridiculous, especially when there are so many people within a few miles of here who are just trying to sort their treasures from the mud and water and hoping their insurance will cover the damage, but I do feel as if I was on a path that was looking really friendly and like a good place to be when this big ol' bear jumped in and left paw prints all over it.

For a minute last night, Cliff and I talked about maybe turning off the power every now and then.  But I know this feeling will go the way of the No-TV period my ex and I swore to on our return from a TV-less several months overseas.  That one ended with the Olympics (have to see the Olympics!).  This resolution will probably end with the new season of House and a desire for consistent hot showers.  I don't know.

Like Ric Elias, I learned something in this 48 hours.  I learned that:

Weed-whacking does not a happy spirit make unless you own a Sears store.

Knowing how to start the generator does not make one special, but actually doing it makes the supervisor from The Maids, Inc, get really wide-eyed.

Horses shit non-stop, especially in the dark and during their owners' attempts at self-actualization.

Doing anything in the dark other than sleeping is pretty pointless as daylight will reveal that you did a terrible job and there was a reason why our forebears went to bed at sundown.

We are a very, very noisy species.  We could definitely tone that down a shade. 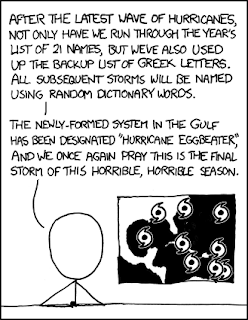 "Disaster" has different colors and shades of meaning.

Getting all excited over surviving a weather event has to be put into perspective with other such events like the total ash-up of those poor folks at Pompeii and the years of mess and pseudo-recovery in New Orleans and Brett Favre actually retiring for real.

There's some small, humbling good in everything that happens, even if it's just that it made us stop for one second before ordering another new iPhone.

My plane didn't go down in the Hudson.  No one blasted my building out from under me.  I didn't even have to get airlifted out of a raging torrent by handsome helicopter dudes (for which eventually I prepared by wearing my best pj's to bed).  But for a minute I had a glimpse of something I'd forgotten--quiet and peace--and I'm definitely going to try to catch that firefly again before I forget where I saw it.
Posted by Joanne Friedman, Freelance Writer, ASEA Certified Equine Appraiser, Owner Gallant Hope Farm at 8:43 AM

I really enjoy your blog. This was a great post, many lessons to be learned.