Putting a little polish on the Dress For Success model

Today, horse fans, we are going to discuss why clothing matters.

For the three of you who didn't just click on over to a cute kitten video, let me clarify.  I am in no way going to ride the tide of buying more, better, and pricier duds for yourselves and your mounts in order to please some far-off Famous Trainer (whose name, George Morris, I shall not mention).  First, let's look at the article above and the study reported therein.

The study, in a nutshell, determined that without a doubt, in a statistically significant way, people given lab coats to wear showed more attention to detail when performing a set task than did those wearing non-lab-coat attire, in this case, a painter's coat.  Lab coats meant fewer errors.  Pretty cool.  Here's the graphic:

It's hard to read unless you enlarge the page, but the first really big grey block on the left indicates the number of differences found (in other words, more correct answers, longer attention, more precise attention, etc) in the group wearing a lab coat.  Obviously that group did best.

What's equally revealing, however, is the size of the other two bars.  The third one on the right reflects the group wearing a painter's coat.  The one in the middle reflects a group simply seeing a doctor's lab coat while they worked.  Note that that's the smallest of the three bars.

The conclusion drawn by the researchers is that wearing a coat associated with a doctor makes one feel obligated to pay attention to the task at hand and complete it correctly.  I have to admit that I got a giggle out of the second bar showing that seeing a guy in a lab coat not only did not improve scores on those parameters, but resulted in the lowest scores.  My take on that is that 1) seeing a doctor in the room means I don't have to think anymore because there's someone there smarter than I am, and 2) doctors scare the piss out of most people, and their performance suffers as a result of anxiety. 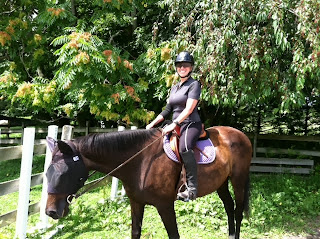 What this all means to us horse people is open to discussion, so let me open by saying that while I do not ride better when I'm dressed in full-bore English Rider Formal, I do indeed perform better when I'm wearing clothing appropriate to the activity in which I'm engaged.  I have been known to hop aboard a horse wearing whatever I have on, mostly jeans or leggings of some sort (rarely a dress, though I did do that once).  Jeans and my English stirrup leathers so something strange to my inner calves that I prefer to avoid.  Explaining the bruising isn't worth the convenience, and I really hate that pinchy-flesh feeling anyway.  When I'm wearing clothing that isn't conducive to my personal gyrating riding style, I'm uncomfortable and not performing at peak.

But there's a bit more to it, and that more is that I do feel kind of special when I'm at least wearing riding tights if not actual breeches.  Since I don't compete anymore, I feel no compulsion to meet the standards set by the current batch of notable riders.  Styles in the ring change annually.  My style changes according to my mood.  I recently bought some very pretty plaid casual breeches, but I haven't worn them yet.  I'm saving them for a day when I know for sure someone will see me in them.

The second level of this research is more interesting to me.  We should perform worse as a group if there's someone in the bunch dressed to the equestrian nines.  For my part, that's only the case if the someone is an instructor or trainer who I dislike.  In that situation,  I tend to be more focused on critiquing how his Tailored Sportsman breeches are sagging over his non-existent butt or how her Fits jacket is stretched to the limit across her ample shoulders.  I don't ride well if I'm not actually paying attention to my horse.  If the person in question is someone I already respect, then the rule no longer applies.

Overall, the problem with the entire clothing issue is that we have learned as a society to attribute qualities to the person within the clothing based on the clothing without the person.  Were I to put on mechanic's overalls, someone might make the error of thinking I know more than they do about oil pressure and the like.  They'd be wrong.  Most of the time we're wrong.  That's how scammers get the better of us.  If they dress the part, we don't look farther than the tailored suit before we whip out our checkbooks.  That's not a good thing.

As always, I'm offering a plea for more reasonable equestrian clothing as befits an athletic event that often lands said clothing in six inches of muck or soaked with "glow" (equestrians don't sweat).  But the change will have to begin at the top levels, because the rest of us need permission to stop looking like bankers on horseback and start looking like the extreme athletes we truly are.
Posted by Joanne Friedman, Freelance Writer, ASEA Certified Equine Appraiser, Owner Gallant Hope Farm at 11:19 AM