Human Memory: How long does it take for working memory to fill up? - Quora

Human Memory: How long does it take for working memory to fill up? - Quora

First, you should all go to the Quora site and check it out whether or not you read the linked article above.  I happen to know that at least six of you are avid learners of random information, and there's no more intriguing posting place for such than Quora.

Now read the response to the question above that was posted by NASA engineer/instructor Robert Frost.

I found this particular topic fascinating because I used to teach it in my classes at Newton High School.  The kids were always baffled by why some stuff seemed to stick in their minds while other stuff just glided right on through and out the other side into the abyss.  So every year I would start off with a "This is Your Brain" sketch and next to it a "This is Your Brain On English Class".  The first was the standard lumpy picture we all draw when asked to depict a human brain.  The second was the same brain divided by vertical lines.  The images looked sort of like this: 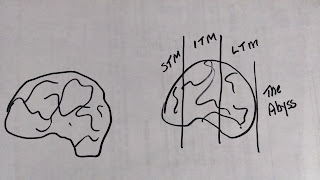 I explained to the kids that when I told them something in class and they just kind of heard it with one ear and maybe wrote it down, that was that information byte's entry into the Memory Game.  Everything goes into Short Term Memory (STM) first, and it's from that file that we pull the information we use in the moment.

Note that there is no actual relationship between the levels of memory and the shape of the brain, but that image was my effort to help the bytes move into Intermediate Term Memory (ITM) which only happens when the new stuff is linked to something already in residence.  Everyone has a basic brain image in their cache, so linking the idea of levels of memory to that ensured that the concept would stick for at least a little while.

In order to get the bytes into Long Term  Memory (LTM), practice is required.  So periodically I would refer back to this first-day lesson.  If the students were actually attending to my lesson (of which I was assured by my threatened pop quizzes and vile punishments for failure to reproduce said information), then the journey of the information to LTM was a done deal.

At the end of the year, once the final exam was over and they were sure they wouldn't have to see me again, they shoved it all past the third line into The Abyss.  I take no responsibility for that.


But the article above has a much clearer explanation with a very cool diagram that will help you really understand what happened to that great store of knowledge you got last month from your trainer or from that awesome new book by some Famous Rider, or via video input from a cool two-minute You Tube thing on Facebook.  It's long been known (I learned this stuff back in the mid-60's in college as a psych major) that we can comfortably remember 5 discrete (meaning "different") pieces of information at a time.  We can stretch that to 7 if we really try.  More than that requires some finagling and promises to the brain of a long rest and maybe ice cream afterwards.

Check out the chart that shows how our short-term learning cache fills up, however, and note the comment that new learning can't take place until the cache drains a bit to make room for it.  This is a relatively new concept, and I'm loving it!  It's particularly important to those of us who have been at something (riding included) for a long time and are full up with stuff that we're trying to shove into long term memory.  In fact, our LTM is also full up, and making room for more stuff requires that we remove some of the stuff that's already there.  I, for one, seem to have no problem doing that.  Today I can remember my first-grade teacher's name as if she were standing in front of me.  I cannot, however, remember when it was that I bought that saddle or who borrowed the book from which I'd planned on quoting.  Tomorrow that might change, or it might not.  That might depend on whether I've still got this stupid song replaying in my head.  That's the piece labeled "distraction" on the chart.

I tell you all of this in hope that if you understand how your memory works you won't be so hard on yourself when you can't recall exactly where your hands should be or what combination of aids is required for a special movement with your horsey partner.  And also I am hopeful that you can employ the learning pattern to help you actually remember more than you thought you could.

If you'll excuse me, it's time I figured out where I left my car keys so that I can go into town to get whatever it was I forgot to get yesterday that I can't recall just at the moment but I'm sure I will when I get to where I'm going....wherever that is.