I'm not going to try to summarize the vast array of stats available for interested parties to search through.  I do hope some of my Thinking Horsemen will read them, at least the ones that relate directly to you.  What I've linked above is one simple fact:  The US has more horses than any other country at approximately 9.5 million, and full-time workers in the horse business number 1.4 million.

That means 1 full-time human for every 8 horses.  Think about it.

I think it's safe to say that the Unwanted Horse problem is about a huge and squirrelly an issue as exists in our society.  Picture the pyramid we use to describe those crazy schemes where the guy at the top derives his massive income from the hard work of the layers of minions below him who he has talked into buying into the program.  The more they sell, the more recruiting they do, the more he makes.

Bear with me while I belabor this imagery.

By all rights, the equine pyramid is reversed.  At the bottom should be a horse.  Poor guy just sits there hoping someone will throw him some hay and put water in his bucket.  See him there?  Now on his back put the family that owns him and all of their expectations.  On their backs you can stack the necessary practitioners without whom they wouldn't be able to keep the horse because they aren't capable of trimming hooves, fixing broken parts, making his teeth shiny and smooth.

Above that is where the fun really starts.  That's where you can pile, in no particular order, the rest of us who are trying to get our due from poor Fuzzbutt down there sagging under the pile.  That includes me, of course, writing my little blog posts and books.  It includes barn managers, kids making a few dollars mucking stalls, hay producers (that's me too), grain companies, farmers, blanket makers, bridle makers, saddle makers, cute horsey t-shirts for the owners to wear makers, people boots, brooms, muck rakes makers, shiny earrings for Western Pleasure riders makers and on and on.

So you have to ask how there can be unwanted horses when each horse is responsible for supporting a few of those 1.4 million people.  If anything, one might posit that horses should be very valuable property to own (not just expensive, but actually having value).  It's a little mind-boggling, right?

What's missing from the pyramid is that the horse population is fluid.  There may be roughly the same 1.4 million humans doing his bidding, but he's only got a limited useful lifespan.  Behind him are younger, fresher, new horses being produced daily.  So it's not really one horse at the bottom of the pyramid, but a stream from which one crawls ashore and pushes the current resident into the mud. 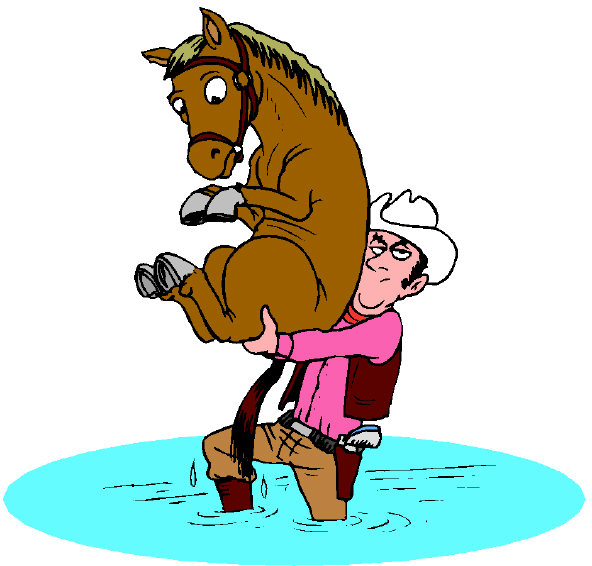 It's that muddy spot that concerns the horse world.  The question arose "where are all these horses coming from?" and the answer is "everywhere".  They're the child's pony that was outgrown and the hunter that can't make the jumps anymore. They're the "culls" from a breeding program aimed at producing Paints with lots of "chrome", and they're the fun trail horse that developed navicular.  They're Every Horse and any horse that can't be cared for any longer.  Mostly, they're hot potatoes.

What do you do with your horses when they reach that point where one more year of use will probably be all they can manage?  Do you sell to someone who may or may not know what it means to keep a senior horse or one in need of constant care?  Do you give it away?  Do you keep it until it dies?  Do you ship it down the road to auction, or do you close your eyes and snivel your way through a rescue placement?  What do you do?

I'm going to refuse to pull the holier-than-thou card.  Yes, I keep my horses till they die...now.  I couldn't always afford that, and some were sold to other owners.  That keeps the horse worlds lifeblood pumping.  And anyone else who chooses the high horse of superiority because they can keep theirs instead of climbing to the high road of compassion for the folks who can't, please don't comment here.  There has to be an open dialog and a recognition that in fact my pyramid isn't the reality.

The reality is that that horse is standing on the back of his owner, and the rest of the horse world is balanced on top, grasping, judging, and uncooperative.  A major overhaul will be required before this pyramid crashes.  It's crumbling now.  Are you the one whose decision will bring it down or the one who will find the solution?

Be the solution.  I won't tell you how because I don't know, but figure out a way to contribute instead of merely passing the buck and the hot potato to some unsuspecting glassy-eyed horse lover.  Just do it.
Posted by Joanne Friedman, Freelance Writer, ASEA Certified Equine Appraiser, Owner Gallant Hope Farm at 1:40 PM