What do you know about horse welfare?

FIRST, the self-promotion!  My newest book, Horse Bound, is available for order from Amazon, BN, and iUniverse now.  No Kindle version yet, but there will be an e-book version at iUniverse soon.  Shop, my Faithful Readers!  The holidays are nearly upon us! 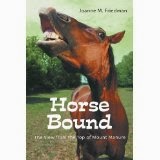 Examining Modern Perceptions of Horse Welfare and Use | TheHorse.com

There are a lot of people entering into discussions about animal welfare online.  That's not news.  Nor is the fact that the discussions often become heated.  It would appear that while the majority of Americans are in favor of better treatment of animals (livestock in particular), few actually have hands-on experience or know much about the animals they're trying to protect.  Watching the discussions rage on, I had the feeling that the people most adamant were the ones least involved with the animals.

This article confirms that notion.

It's not hard to understand why the work of Temple Grandin has been so popular.  Of all animal advocates, this amazing double-PhD animal behaviorist has the ability thanks to her severe autism to actually have some insight into how animals think and feel.  It's to her credit that she has gone public with her situation and shared her fascinating insights with the world.  She is the primary source of information for builders and managers of slaugherhouses across the US, and she has made a difficult (and contentious) situation better for the animals while the rest of us duke it out over the grand morality involved in slaughter.

Just this weekend I came across a comment regarding horses and their training that kind of set me back on my  heels a bit.  The statement that horses don't think but only react based on instinct is not a new concept, but I had thought it was currently popular only in certain countries.  The reason for that belief persisting among some religious folk and some cultures is that there is an underlying belief that animals are unclean, don't have souls, and so are lesser creatures than humans.  Years ago I heard this from a Muslim friend who insisted I couldn't have trained my horses because they simply don't have the ability to process information.  I was surprised to hear this same sort of belief come from a similarly-conformed person*.  It's still alive and well.

Regardless of its source, the fact is that this among other beliefs about horses and other livestock underlies much of the rescue and protection effort that is in constant flux.  Yet the reality is that the people closest to the animals have quite a different viewpoint from those who like to look at kitten photos and think horses are simply elegant in paintings.

What I know about horses was hard-earned, and I'll bet most of my hands-on horse peeps can say the same. When I was young, I was all about how pretty horses are and how much I wanted one in the backyard so I could, like Alec Ramsey in The Black Stallion, have an intense relationship with one of these fine creatures.  The reality of horses didn't impinge on my fantasy in any way.  It took years of lesson horses, years of horse ownership with my horses boarded out, and even more years with them on my farm before I began to really understand them.  And I can honestly say at this point that most people should not own horses and have no idea what they're talking about when it comes to welfare issues.  That includes some erstwhile "professionals".

Dr. Karin Bump, who gave the speech on which the article above is based, finds the following regarding horses and human culture:


Sociologists use the term legitimacy to explain how people acquire and accept certain ideas and to show how concepts and beliefs—such as using horses for work or leisure—become “legitimate” within a culture, Bump said. There are three levels of legitimacy, she added, that apply to horse ownership and care:
Once we get beyond the "socially and ethically okay to own and use horses" piece, we're lost. As a unit, we humans can't quite get a grip on what horses need and what is okay and not okay to do with them.  The ranting takes on a life of its own barely related to reality in many cases.  And no, I'm not advocating harsh training methods or management techniques that endanger the animals, nor am I building a slaughterhouse in my yard.  I'm saying the real pros need to be the source of our information and our planning, not the social media livestock "experts" who abound.

Before cars and the industrial revolution, society had pragmatic and cognitive levels of legitimacy with regard to horse ownership, Bump said. There was no moral level because people didn’t even ask themselves whether it was right or wrong. They needed horses in order to survive, and in order to survive they had to take care of their horses and keep them healthy.

We are swirling around the drain in the horse biz, and a lot of the circular motion is a result of the focus having shifted from the cognitive to the moral level of concern over animals.  The concern isn't a bad thing, but we need to begin to sort out the equi-reality from the anthropormorphism.  And that's going to be tough.  There are more horse-keeping and training theorists out there than there are horses, and they're more than happy to share (not always nicely) their moral stance with all comers.

So what do you know about horse welfare?  If the question made you pause, you might want to consider reading some of Grandin's work on the subject.  Her books and videos are invaluable sources of real information that often flies in the face of conventional wisdom.  And it would also be of benefit to double-check any statement that begins with "You should" or "All horses."  Unless you found them in Grandin's books, they usually lead to spurious information.  Spreading such stuff is easy.  Bringing the crowd back to a dull roar in the face of facts isn't.

In closing, I have to note that any research done with live critters, human or otherwise, is going to be flawed.  The best efforts can be found at the best vet schools and universities around the world who are determined to study these things.  But a control group is never accurately representative of the test subjects because each subject is completely individual in every way.  Add that until someone makes time travel viable, there's no way to retest the same subject, and the problem multiplies.  You can't un-touch, un-teach, or un-kill a test subject and call for a do-over, so we will continue to wrestle with these issues (and each other) indefinitely.  Grab a coffee, have a snack, and go riding.  You'll find us here in the same spot when you get back.
~~~~~~~~~~~~~~~~~~~~~~~~~~~~~~~~~~~~~~~~~~~~~~~~~~~~~~~~~~~~~~~~~~~~~~

*I'm not pro- or anti-Muslim or any other group, but that's where I heard this belief first and got the explanation, so don't bother lambasting me for profiling.  Culture is what it is.
Posted by Joanne Friedman, Freelance Writer, ASEA Certified Equine Appraiser, Owner Gallant Hope Farm at 11:30 AM

Good article. It seems most issues today, whether equine, political or social, have "my side and the wrong side." Prevailing debate usually begins not with facts, but by demonizing those who disagree.

Horses think, dream, love, detest, learn, teach, strategize, and lots of other things many people reserve for our own species. Why? I'm a retired equine professional turned Christian writer. In my opinion it is only human arrogance that relegates horses (or other mammals) to some lower order status thus excusing our responsibility to be good stewards to all.
Disdain and the lack of respect for all animals is a fairly recent change in the timeline of human history. But humans seek balance. In order to rationalize the way we treat animals (and each other) we have to "dehumanize" them.
I've read quite a bit by Temple Grandin. If only folks would listen. What remains is for the rest of us to do our best for the horses in our homes and in our care, and the remainder as we are able.

You know I couldn't agree more, Lynn. We dehumanize anything we can't control, including other humans.